During my senior year, I was obsessed with film and studying the art of screenwriting. I told my best friend and my family that I hoped to achieve a degree in screenwriting and vowed to make quality films, real films – films that touched the hearts of those who truly care about things like love, beauty, magic, and truth.

While I may not be persuing the same dream, my hopes of writing a screenplay one day have not disappeared completely. I have the beginnings to a few different manuscripts lying around in places, none have come close to being finished. But while my dreams of being a revolutionary screenwriter have been put on hold, my desire to see good filmmaking remains just as strong.

For the first time since seeing previews for Eternal Sunshine of the Spotless Mind, I am excited for a film. Excited like telling my friends, saving the movie link in my “Favorites”, and marking the release date on my calendar. 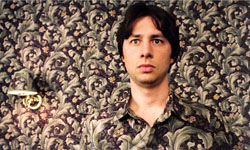 Zach Braff, writer, director, and star of Garden State, also stars in Scrubs, which happens to be my favourite night-time television show on NBC. While he may play a goofy and eccentric medical resident on the hit sitcom, it is obvious to me that Braff shows great range and ability as an actor. And I certainly look forward to seeing this displayed in his upcoming film.

Not only does he have a star cast, with actors like Natalie Portman and Ian Holm, Braff has also compiled a star soundtrack. With artists like Travis, The Shins, Coldplay, The Postal Service, and – can you believe it? – Nick Drake, this is one soundtrack I won’t hesitate to buy.

I highly recommend skipping over to Garden State and watching the trailer. Afterwhich, move on to Zach’s blog, which is so good, I’ve added it to my list in the slide menu.

August 6th marks the date of this movie’s limited release and you can count on me being at the theatre that night, even if I have to go alone. There are movies you see because they’re funny, others because they’re tragic, and more for their action. But then there are movies with stories that stay with you. Movies that, when you see them, you never forget when and where you were when you saw it for the first time. I strongly feel that this is one of those times and I’m giddy just thinking about it.