Okay, STOP. Because I know what you’re about to do. You’re about to scroll past all this text and go straight to the pictures, but you CAN’T this time! You have to read this story! Because if you’re anything like me when you’re looking at a photographer’s blog, you read the first few sentences before getting bored and then you bypass the story and go straight for the goods!

So please. Do me the honor of reading the story first. This one is different. It’s special because this story is my little brother’s story, so it’s that much more important…

When I moved to Tennessee for the wrong guy back in 2004, what I didn’t know was that Tennessee would still be the right place. So many right things have been the product of me moving here. I finished my BA, I started my photography business, and I met George. But I never—never, ever, ever—thought I’d end up finding the right girl for my brother.

Our last visit to Seattle was in March over spring break. When we got back, I posted several pictures from our trip to Facebook, which included pictures of family members. Kristin, a friend from work (at Starbucks) saw the pictures and later told me she thought my brother was “hot.” Of course, I knew she said it for several reasons: 1) To annoy me, 2) Because she meant it and 3) To annoy me.

My brother and I have always been close and knowing him, I thought he’d appreciate the knowledge that a pretty girl across the country thought he was attractive. So I told him. Kyle chuckled and said, “Really? That’s funny…”

A few months went by and Kyle created a Twitter account. Of course, it was only a matter of time before Kristin, an avid Twitter user, recognized my brother whenever we interacted via the social network. So she started “following” him and then he started “following” her and over time, via direct messages, then direct texts, then actual phone conversations…

Well. I think you get the picture.

Pretty awesome how things happen, huh?! I mean, if I had never moved to Tennessee, not only would I have never met George but my brother would have never met Kristin and then where would we be?!

Okay. So thank you for doing me the big, fat favor of reading all of that! Now on to what you’ve really been wanting to see! Kristin and Kyle’s engagement photos! Kyle was here for a mere two days so we had to squeeze in these pictures. Of course, just our luck, the morning we chose to take them, it started raining. BUT! We did get a block of no rain and the clouds even acted as a giant diffuser over the sun, so the lighting ended up being perfect!

These are definitely some of my favorite photos that I’ve taken to date. Probably because it was my brother so I had no problem telling him to do stuff where normally I’d be concerned about making someone uncomfortable. In fact, I enjoyed making Kristin&Kyle feel as awkward as possible. In the future, if you’d like your pictures to be as fun as these, please let me know if you’re comfortable being uncomfortable and I’ll make sure to push it to the limit! 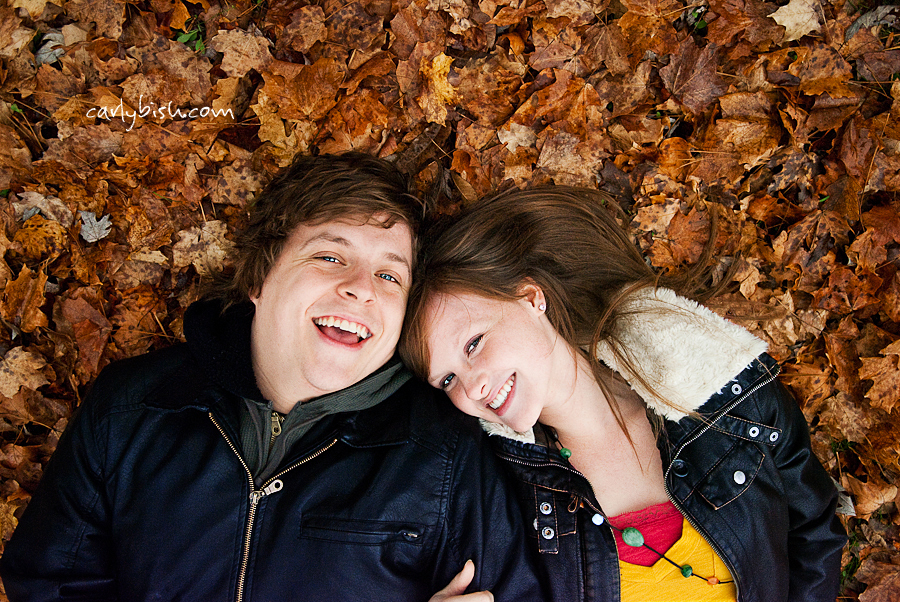 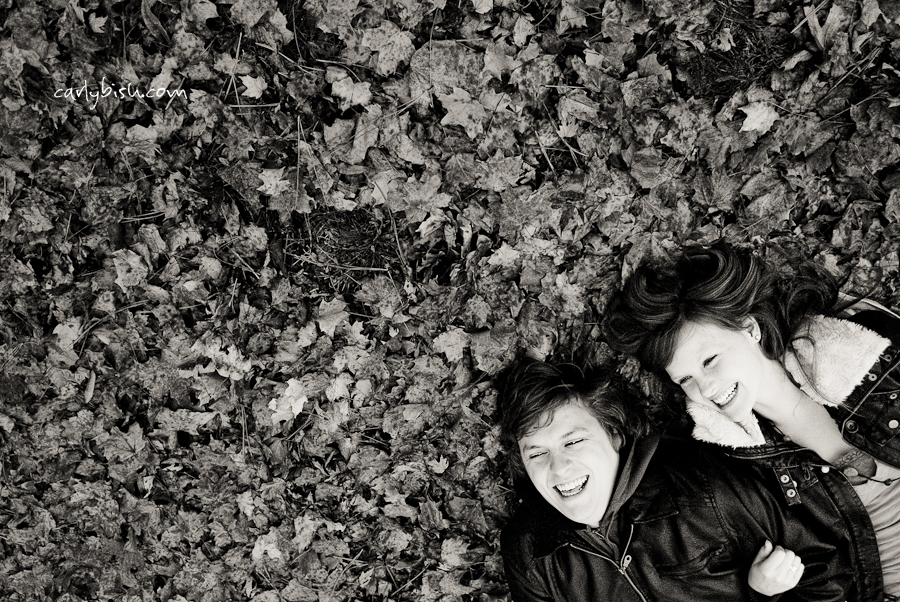 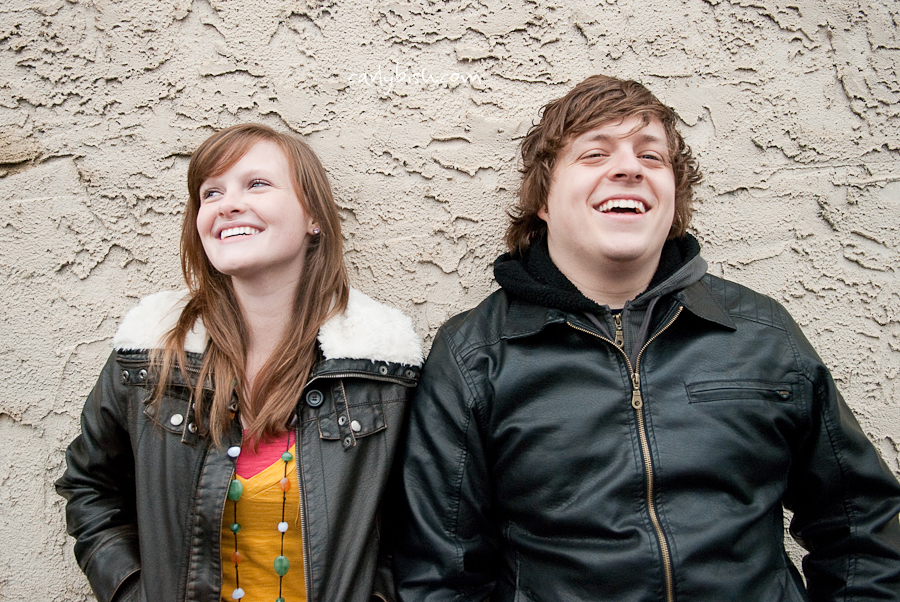 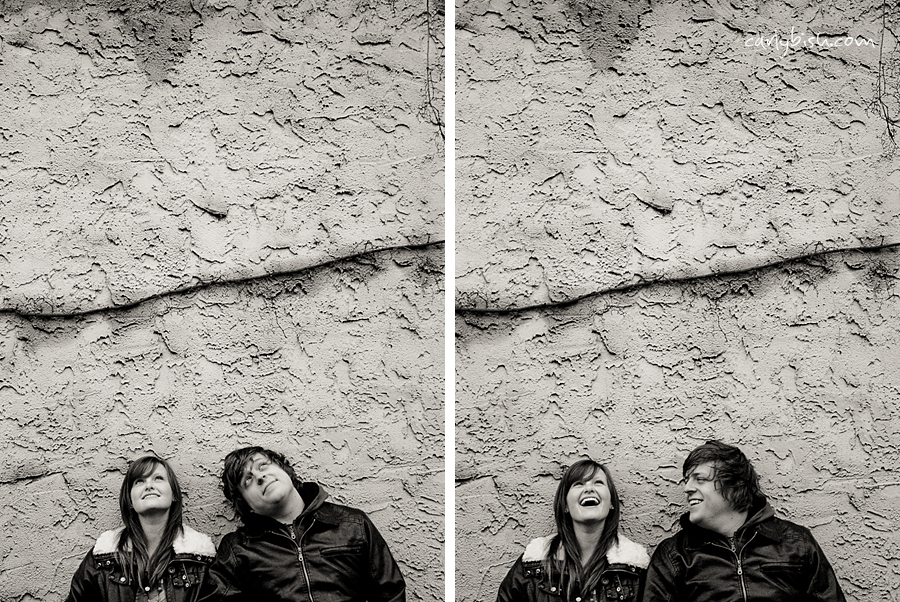 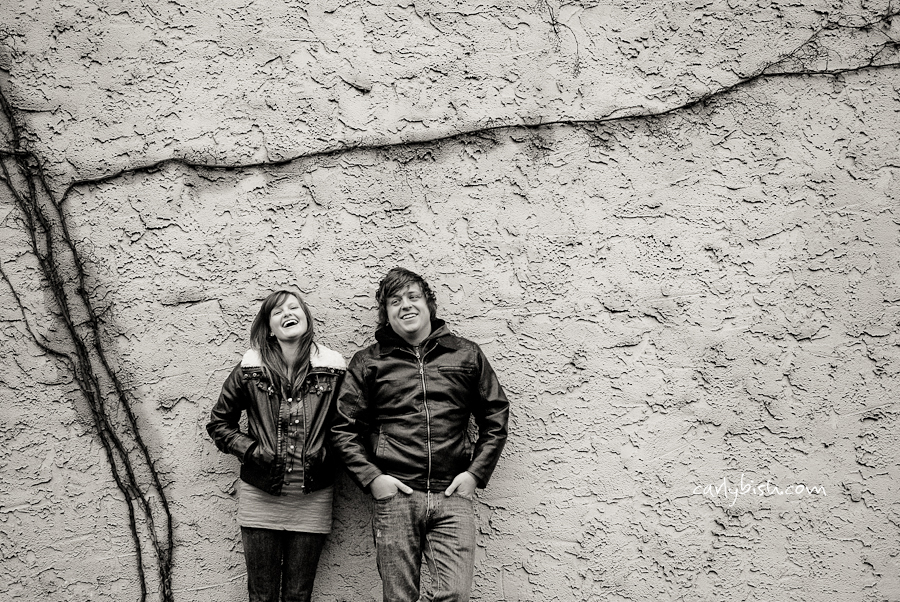 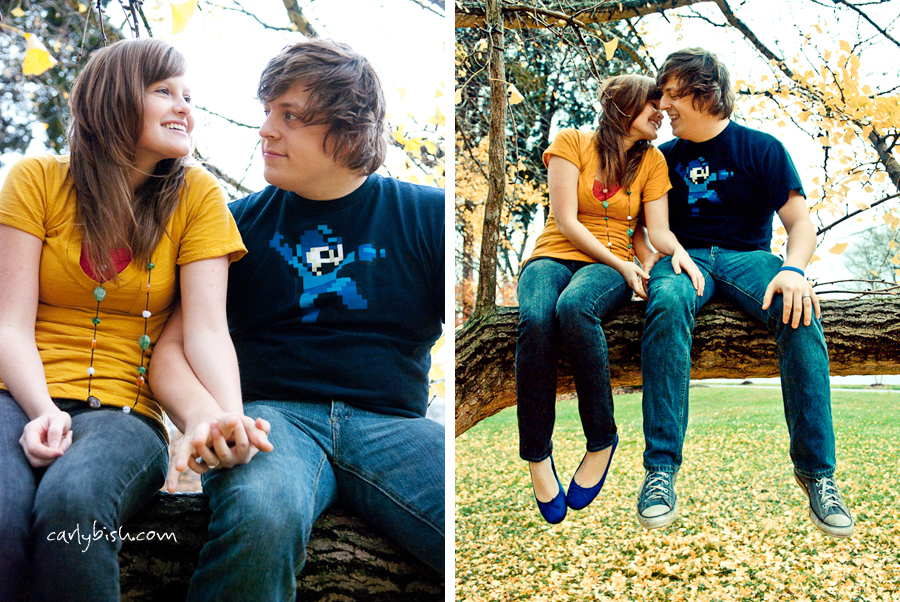 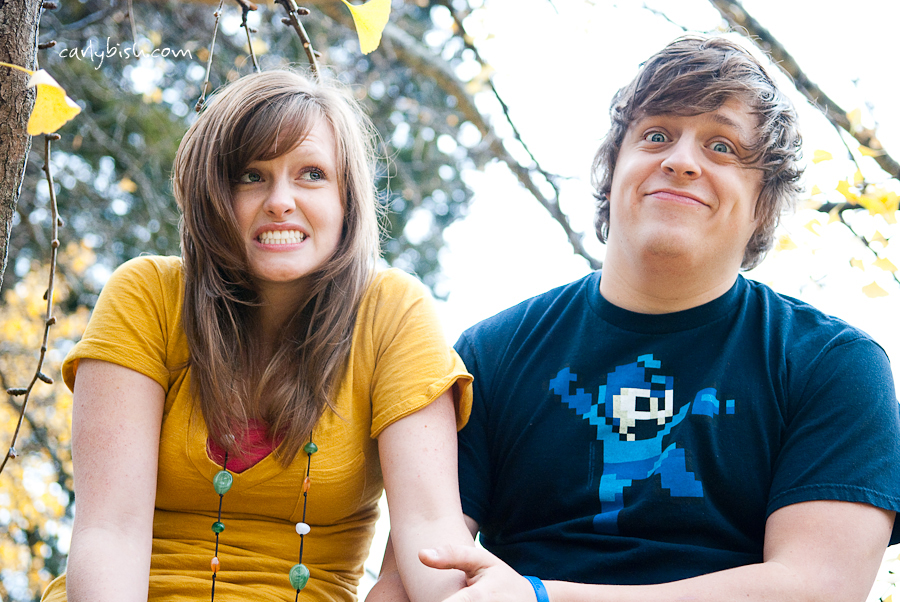 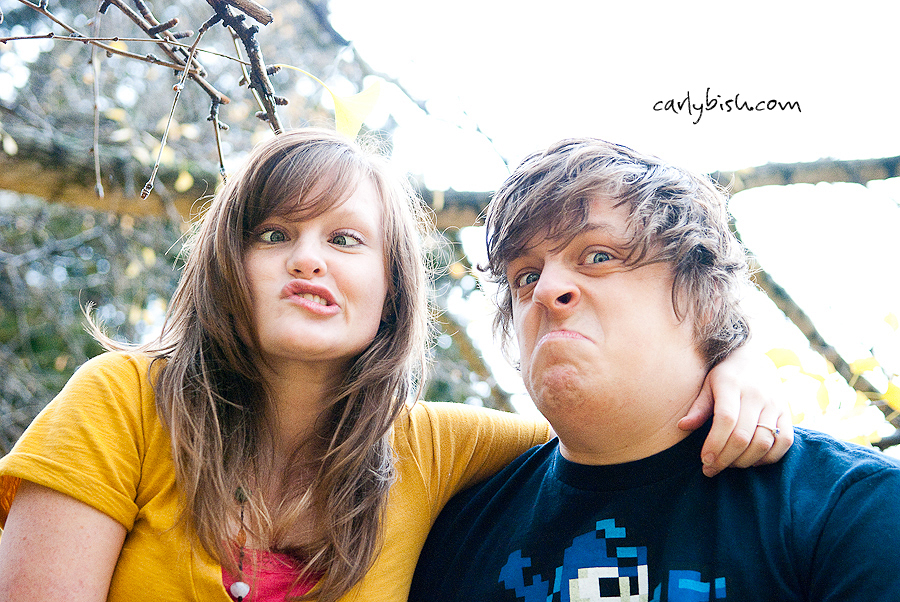 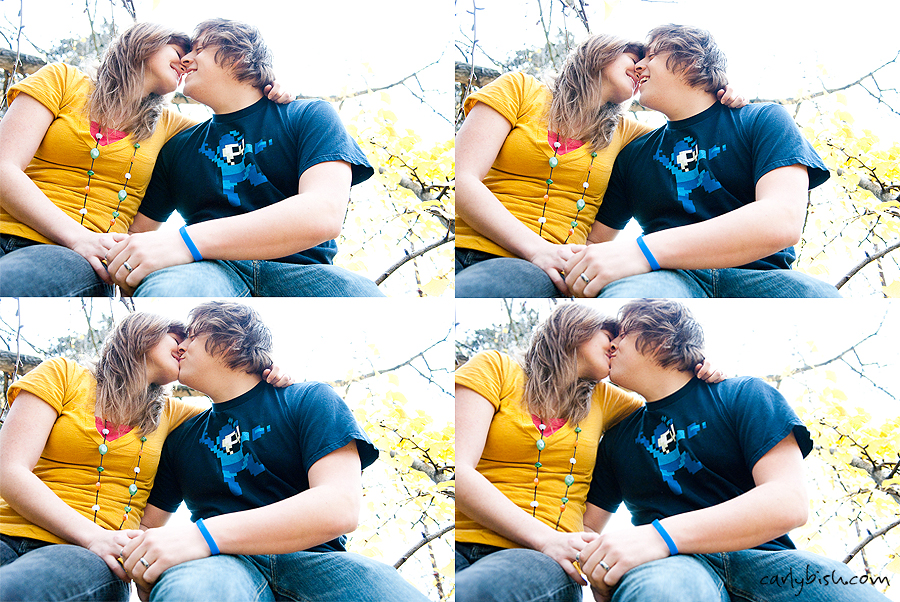 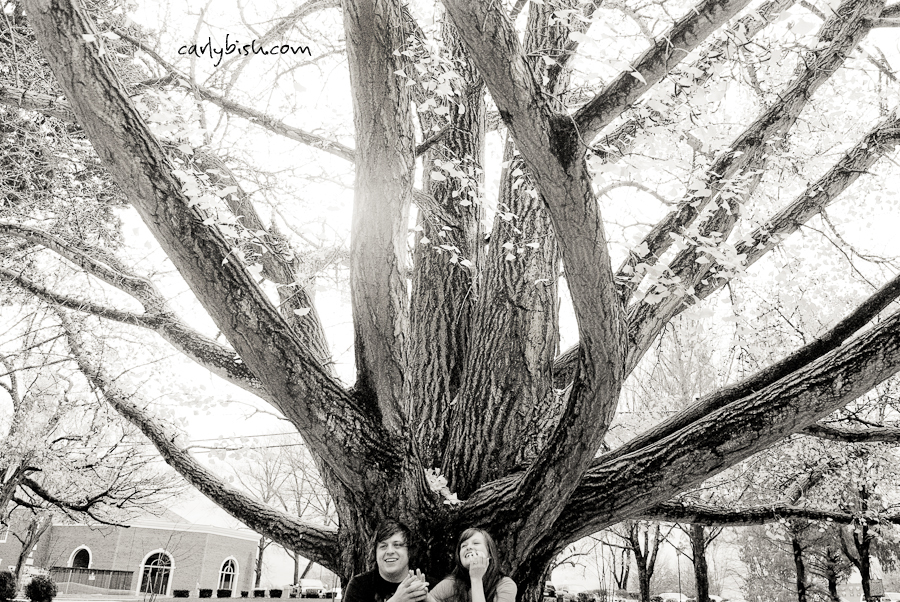 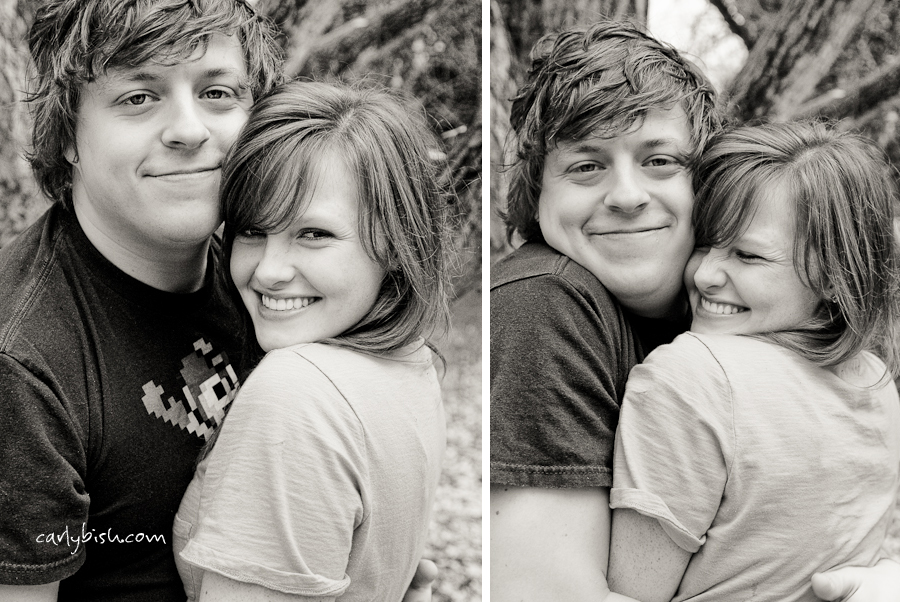 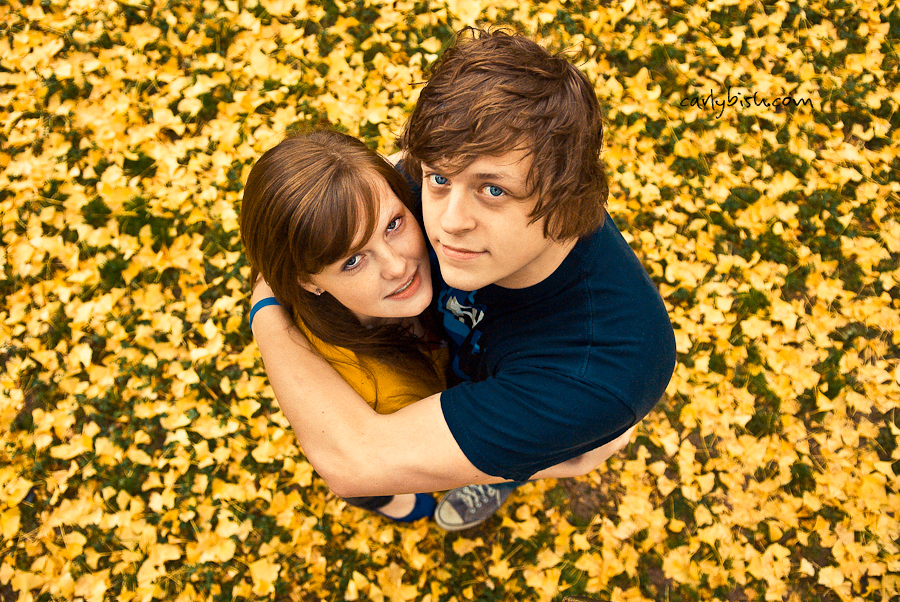 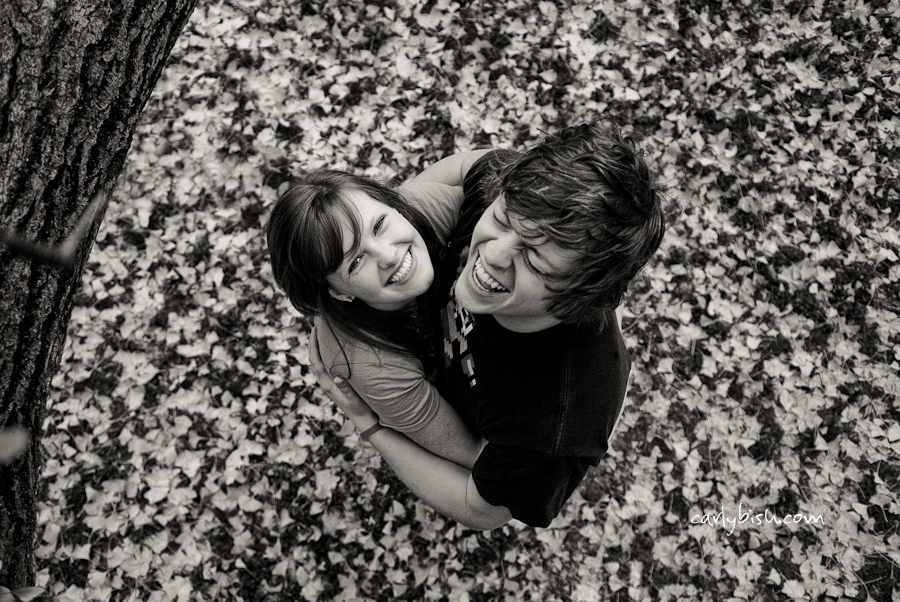 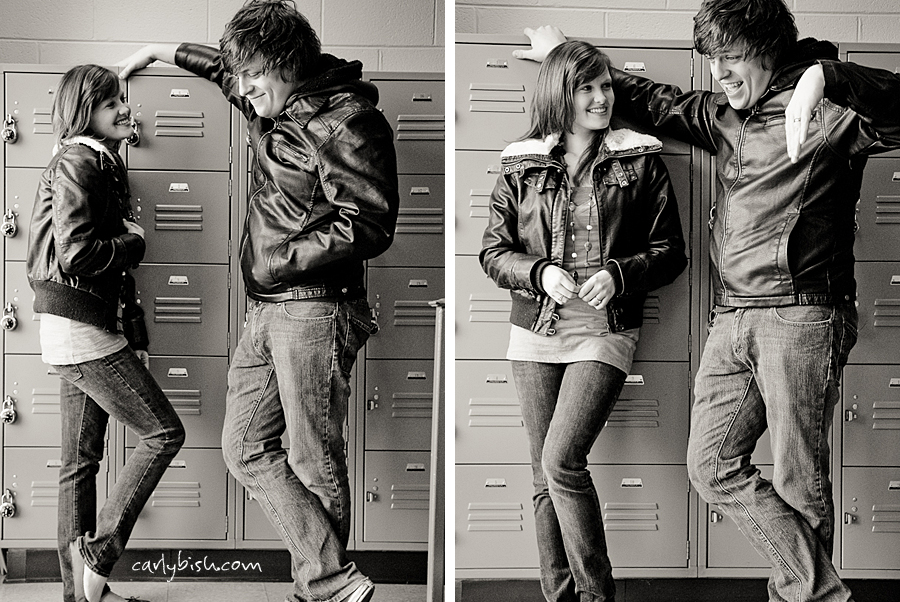 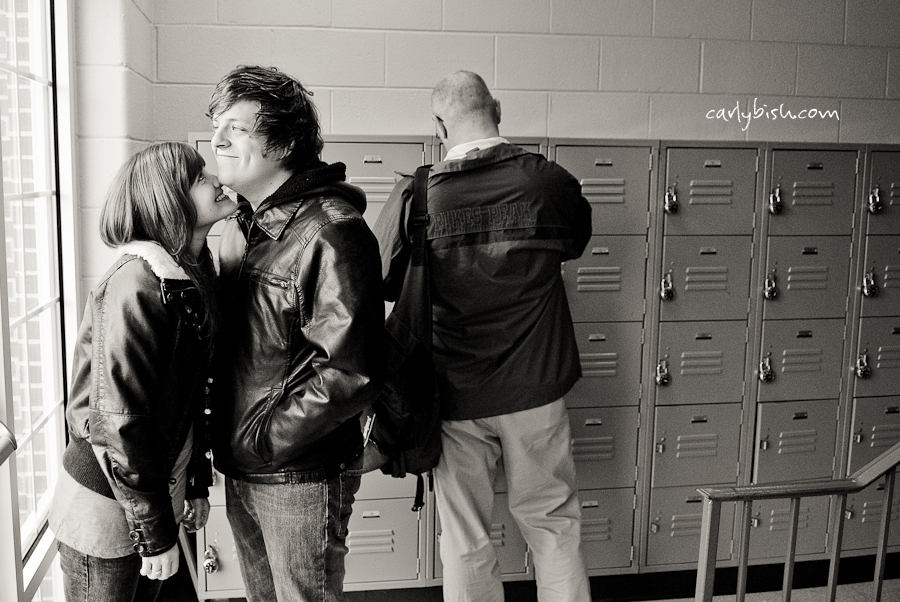 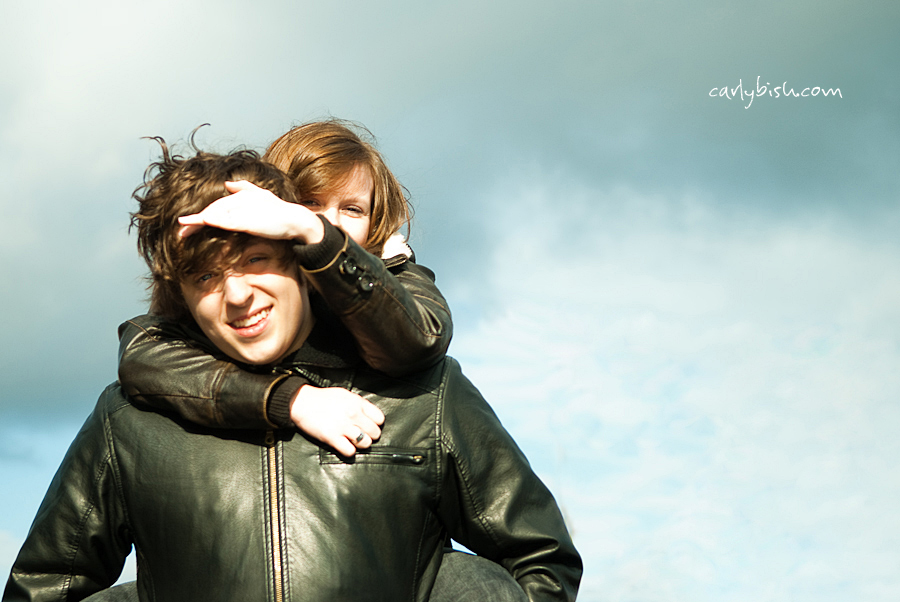 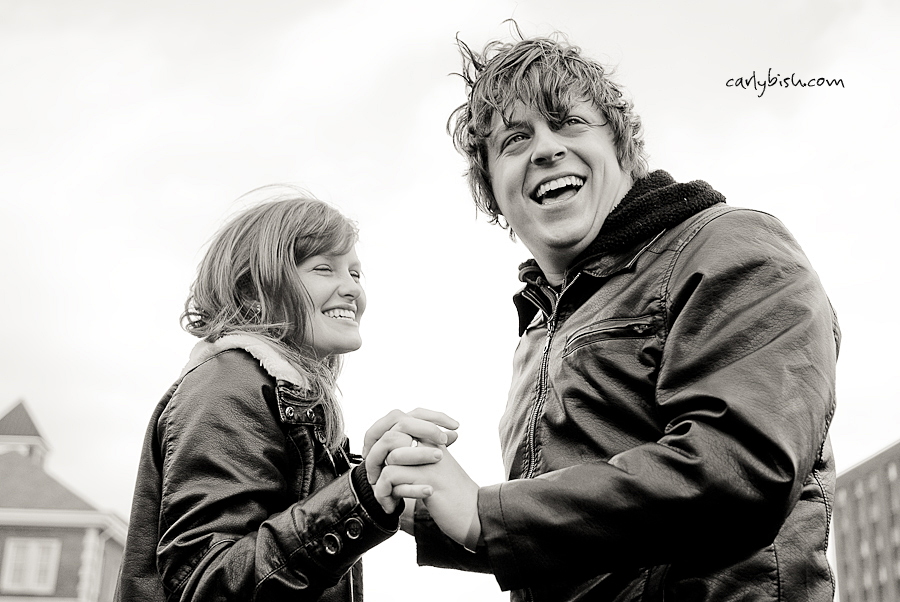 Kristin&Kyle actually requested the “sky-kiss” shot. I’ve never received a request for a specific pose before! So I was super flattered! And I think I’ve discovered my “signature” shot! 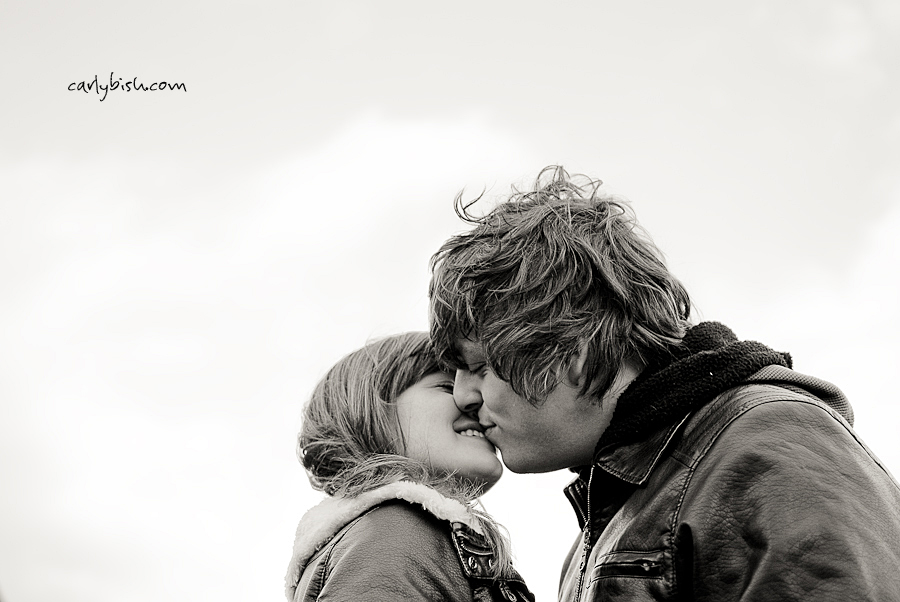 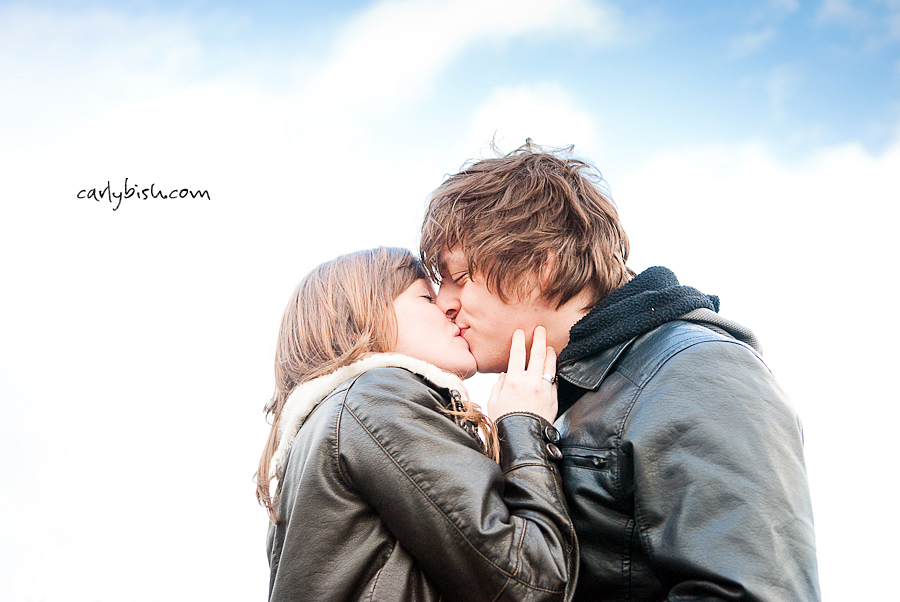 Okay, this next one, I need to give credit where credit is due. The following photo concept was totally not mine. Bobbi&Mike did it a few weeks ago and when I saw this empty parking lot with the arrows (and coincidentally, my brother, a graphic designer by profession, loves the arrow shape for some reason), I knew I had to do it. We also decided to take it a step further and did a neato animated version as well. 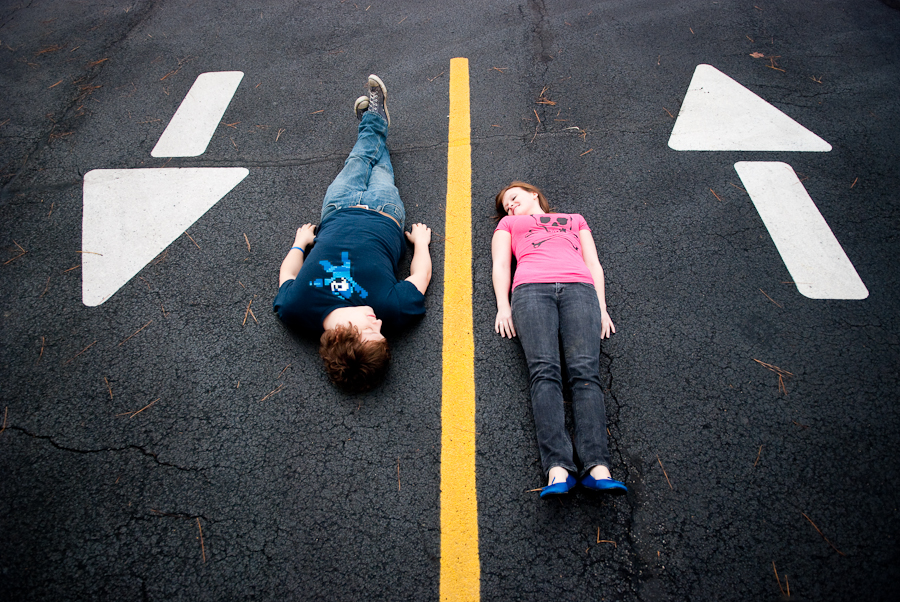 Alright and here’s proof to the limits I take to get the shot! Here I am climbing a tree that was very slippery. I could’ve died. That’s all I’m sayin. 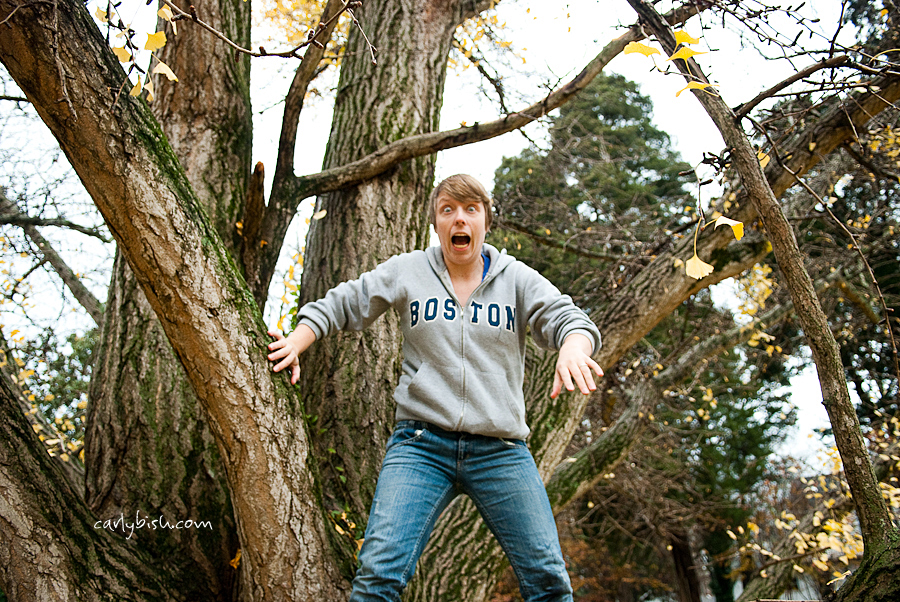